The Chamber offers various historical tours for visitors and kama’aina interested in learning more about the North Shore:

Visit Haleiwa town’s historic sites, from the Haleiwa Shingon Mission to the Lili’uokalani Church, Waialua Court House, and many more. This tour takes you to many of Haleiwa’s 30 major historical sites and into the town’s storied past. Tours by car can be arranged. For more information click here. To schedule a volunteer, docent-guided walking tour, please contact us.

Ideal for school groups, reunions, and special events, these tours can be arranged to focus on the North Shore’s historical landmarks and agricultural sites. Please allow at least one month’s notice to enable us to work with your group and customize your tour experience. To schedule a guided group tour, please contact us.

Today, the North Shore maintains one foot in the old world and one in the new, resulting in a unique charm that provides visitors and residents alike with the chance to savor the past while enjoying the present to the fullest.

It is with reverence for the region’s history and indigenous predecessors that the North Shore casts an eye towards the future as its residents strive to strike a balance between progress and preservation. With room for diversity, it is home to both agriculture and laid-back, family living as well as a frontier for adventure, sports and commerce.

Hawaiians settled in the Waialua and Ko’olauloa Districts along the North Shore around 1100 A.D. and established villages along valleys, streams, and bays. Drawn to the area by the rich ocean waters and fertile lands dotted with natural springs, they grew taro, sweet potato and other crops. In 1832, Kamehameha’s konohiki, or chief, Gideon Laanui, invited Christian missionaries to the Waialua District. Together they built the Waialua Protestant Church. Later a girl’s seminary, often called Hale’iwa, figuratively meaning “home of beautiful people,” was built near the Anahulu Stream. At the end of the 19th century, Benjamin J. Dillingham built a railroad, a sugar mill, and a destination hotel he named the Hale’iwa Hotel.

In 1100 A.D., with the expanding Hawaiian settlement of the islands to the northern islands from the Big Island, Oahu and the North Shore region became home to ancient Hawaiian communities that thrived at ocean/land/river junctures such as the Anahulu River and Waimea Valley.

In ancient times, the Hawaiians divided land into ahupua’a – natural divisions from the mountains, through river valleys, to the sea that contained everything necessary for sustaining life. 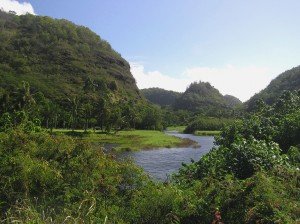 Prior to the close of the 11th century, the ahupua’a of Waimea was given to the kahuna (priest) of O’ahu by Kamapua’a, O’ahu’s ruling chief of the time. Waimea Valley remained home to the High Priest of O’ahu for over 600 years. The last was Hewahewa – the Kahuna nui under the reign of Kamehameha I. After the death of Kamehameha I, leadership of the Islands fell into the hands of Ka’ahumanu, the third of Kamehameha’s wives. Together, Ka’ahumanu and Hewahewa brought an end to the ancient kapu system of Hawai’i (system of laws based upon taboos, particular prohibitions, sacred ways and multiple gods). Hewahewa retired to Waimea Valley.

The first Westerners to land on O’ahu came ashore at Waimea Bay in 1779, aboard Captain Cook’s ship and briefly anchored to replenish fresh water supplies after Cook’s death on the Big Island. The crew recorded that the area around Waimea River was “well cultivated and full of villages and the face of the country is uncommonly beautiful and picturesque.” 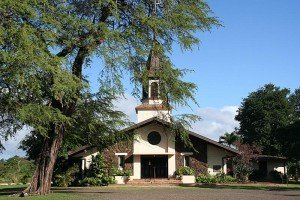 The first Western settlement came in 1832, when Protestant missionaries Reverend John and Ursula Emerson arrived in the Waialua District. Aboard a native schooner, the Emersons put in at Waialua Bay at the mouth of the Anahulu River, where the Anahulu Bridge is found today. They went on to establish the Emerson’s home and the Waialua Protestant Church in the heart of the village, and Hewahewa frequently attended. Today, that church is known as the Queen Liliu’okalani Protestant Church, named after Hawai’i’s last queen who often stayed in Hale’iwa at the family’s country home and worshiped there. 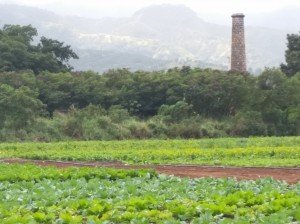 In 1837 with the death of Hewahewa, whose bones remain at Waimea Valley, the rule of the kahuna nui (most high priest) came to a close. In the mid-1800s, the ancient feudal land system was completely changed in the “Great Mahele.” The western system of land titles and deeds signaled the start of private land ownership. Rev. Emerson and his sons helped survey the kuleana (private plots) and most native claims in Waialua District were secured, including that of Hewahewa’s granddaughter, Paalua, who successfully claimed one-half of Waimea Valley lands. But introduced diseases, hardship, and famine by the 1860s had reduced the population from the former nearly 8,000 down to 1,100, per Rev. Emerson’s annual reports. The whaling fleets stopped coming so farming for their supplies ended. Taro was largely replaced by Chinese rice cultivation. Cattle and goat hides, and forest products were the cash crops. The small Halstead sugar plantation had 300 acres in cultivation, with ox cart and river transport. You can see the mill stack still standing near Kaukonahua Road.

In 1898, visionary businessman Benjamin Dillingham, a promoter of real estate and railways, opened Hawai’i’s finest hotel in 1899. It was a grand Victorian hotel he named the “Hale’iwa”, which literally means “house of the ‘iwa”, or frigate bird, and was situated where “Hale’iwa Joe’s” Seafood Grill stands today. The Haleiwa Hotel was the first destination resort in Hawai’i, and the passengers supplemented the railroad’s sugar freight business. Dillingham hired the former Iolani Palace major domo, Clifford Iaukea, as the manager who set the tone of royal luxury. Investors clamored to subscribe to the stocks issued to raise capital for the hotel and the new, state of the art, steel-fabricated sugar mill. Waialua Agricultural Co. went on to develop the best water infrastructure in the islands serving 10,000 acres of sugar cane for nearly 100 years until closing in 1996. 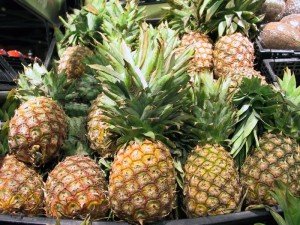 The weekend getaway from Honolulu to the Hale’iwa Hotel became hugely popular with the city affluent who enjoyed a retreat in “the country”. At the turn of the century, a round-trip, two-day excursion by train from Honolulu to Hale’iwa, around Ka’ena Point, cost $10. It included an overnight stay at the Hale’iwa Hotel and a trip through Waialua sugar mill. From there, a carriage ride up to Wahiawa to tour the pineapple plantations rounded out the tour.

The sugar companies needed laborers, so Chinese, Japanese, Korean, Portuguese, Norwegian, Scotsmen, and later Filipino, were contracted to work. The Japanese were especially enterprising and industrious and soon many left their sugar jobs to go into business for themselves. They started laundries, vegetable and meat markets, tailor shops, barbershops, restaurants, three other small hotels and other businesses supporting the hotel guests and the many far-flung plantation camps. Several of the early business families and their original buildings remain in Hale’iwa town today. The town’s historic buildings are protected under the Haleiwa Special District land use ordinance.

Neither the hotel nor the railroad exist today, but Hale’iwa town stands firm – one foot in its rich past, and one foot in a bright future.

Kikawa, Daniel I. Perpetuated in Righteousness. 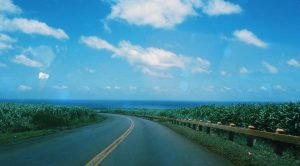 View of Sugar Cane Fields and North Shore from the 1970s